Be The Salesperson Your Clients Love 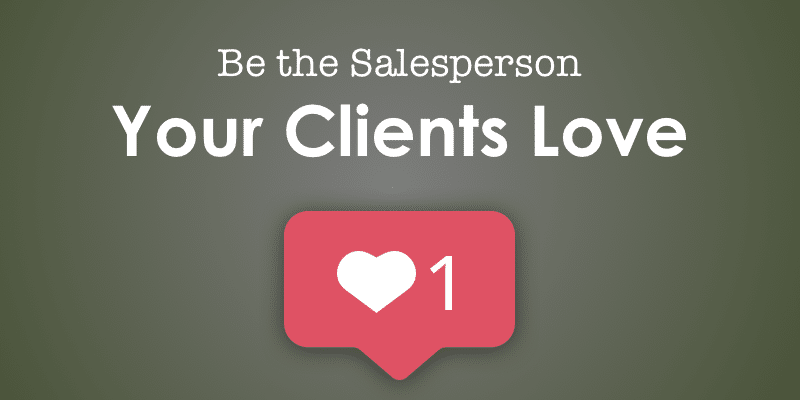 Even as we try to take craft and deliver the perfect sales proposal, we understand that there is sometimes a very real aversion to salespeople. In pop culture, salespeople are rarely, if ever, portrayed in a flattering light. If you’ve ever seen Glengarry Glen Ross, that film probably encapsulates what the public at large thinks of salespeople – dishonest, scheming, desperate, and ready to do the illegal in order to close the deal.

Unfortunately, people who embody the stereotype do exist, they’re uncomfortably common. The shady salesman archetype is so powerful, even honest salespeople get the bad rap. To make matters worse, appearing the slightest bit like the stereotype can be more than enough turn people off.

However, there’s another archetype: the salesperson that you almost think is your friend. These people may not always sell you the biggest package the first time around, but you always come back to them time and again. It’s these types of salespeople that ultimately provide the most value to a business over the long run. Here are a few tips to the salesperson people love to be around.

As the often-used adage goes – “telling ain’t selling”. A lot of salespeople are insecure about their product or themselves and they may overcompensate by being overly talkative. This is, unfortunately, the case not just for used car salesmen, but for those in B2B and B2C businesses of all sizes.

What a salesperson should do instead is to ask the customer or prospect questions about the problems they want to solve. Not only does this save everyone a lot of time and mental energy, but it can also help the customer find a solution to their issue much faster.

Not listening is one of the biggest reasons salespeople get a bad rap. The failure to listen will inevitably result in the salesperson failing to deliver a solution that meets the customer’s requirements. It will also lead to the idea that the salesperson was intentionally trying to push something that wasn’t needed, which we have to admit, can often be the case. This will lead to a loss of trust and can cost your business losses in potential sales in the future.

While a sales professional understands that a “no” might simply mean “not now”, or “the offer isn’t what I want”, the most truly annoying salespeople will keep running after people who have already made their disinterest very clear. Salespeople who won’t take “NO” for an answer can make prospects feel uncomfortable and even hostile towards your business.

In any case, chances are that people who are very persistent in saying no to you are not qualified leads – at least not now. Learn to take rejection gracefully, because you’ll never know if the lead who rejected you may, in fact, get in touch with you later on as their needs change. You’ll be far less likely to close the sale then if you came across like a stalker in your previous interactions.

The tolerance of dishonesty is perhaps the number one reason salespeople have a negative reputation, not just with the public at large, but also often within their own companies as well. We’ve all had bad experiences with salesmen who’ve given us the old “bait ‘n switch”, made inflated claims about their products, or have concocted some story in order to make their offers more appealing.

Sooner or later, this dishonesty will catch up with a salesperson. Unfortunately, it’s not just them who will suffer, but the entire company as well. When a contract is snagged based on false expectations created by a salesperson, everyone else in the business may have a tough time meeting what the client expects. This can lead to catastrophic misunderstandings and a loss of your company’s reputation.

Even when confronted when an uncomfortable question about your offer, it’s best to be upfront about it. Customers will definitely appreciate honesty from your sales team, especially as this is not always expected. This means your lead is far more likely to become a customer in the future.