3 Big Ideas for your Next Sales Proposal 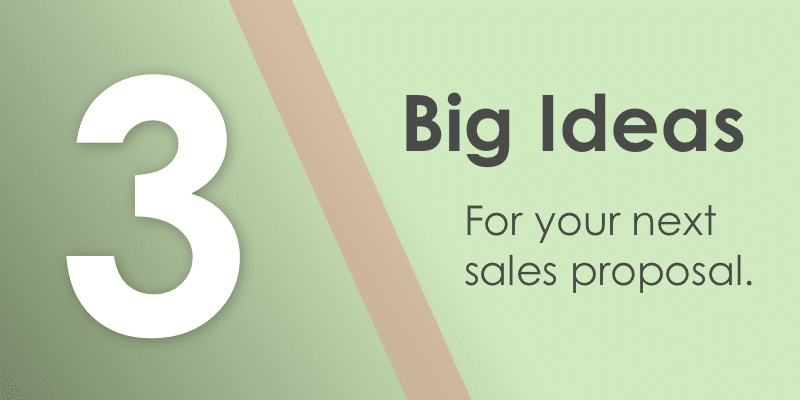 So your last sales proposal was a raging success. Or maybe it bombed. Maybe it just did OK. In any case, perfect sales proposals don’t exist. No matter what you do, there’s always something you can do to make the next one a bit better. Here are 3 big ideas that can take your next sales proposal to the next level.

1.) Tell customers what you can help them achieve.

One of the biggest mistakes we see in sales proposals is when features are mistaken for benefits. While similar on the surface, they create an entirely different emotional response in your customers.
Let’s say you’re selling a beachfront property. The fact that it’s next to the beach is a feature. The fact that it’s 3,000 square feet is just another feature as well. It does not necessarily tell them what they’re able to get out of it.

If you told them that the property had a magnificent view of the sunrise, enough space for your entire family to frolic in during the summer, and a refreshing environment unlike anything they would experience anywhere else, then you’re being a lot more evocative about what they stand to gain from purchasing the property.

Whether you’re selling a product or a service, it’s critical that your proposal is able to give customers an idea of the value your offer has. It’s quite difficult to do that with just features –there simply isn’t enough of an emotional response. As Jordan Belfort says, “people don’t buy based on logic. You also have to create emotional certainty”. Instead, help them imagine how much better their lives will be if they do end up buying, and make them certain it will happen.

2.) Give your customers options.

By offering more than one option in your proposal, you’re priming your customer to weigh more options with your business – rather than with your competitors. A tiered pricing scheme can also be used so you can appeal to a wider variety of prospects. You could even further tailor this strategy by offering a premium showcase option along with a reasonably-priced, but similar alternative that makes your prospect see your company as a better value. Having more than one option in your proposal also has the side effect of making your client feel more empowered, as they’re being given more options. This, in turn, can make it more likely that they will decide to close a deal with you.

Let’s say a prospect was only given one option—option A. They might feel they’re missing out on something, even if they might not know what it is at the time. As a result, they may delay or forgo their purchase decision. But give them option A along with a less appealing option B and C, they get a bigger picture of what they’re getting for the money – even if they would have ultimately chosen the same option in either case.

3.) Don’t make the proposal too long.

The longer your proposal is, the less likely your prospect will read through it. We get why you’re making proposals that are 50 pages long – you might not be 100% secure in your product or you may want to get all the details into this one presentation. But, receiving a 50-page document to read through feels an awful lot like work, and your lead probably has no time to read it. If you can keep it to less than 10 pages, you should be good. Remember that you can always give them additional material to read through once they’re hooked. Just be sure you don’t forget to demonstrate the value you’re creating for your customer in the first proposal.